“Ever since I was a little girl, I’ve dreamed of becoming a doctor. I’ve always wanted to help people. As a high school student, I maintained a 4.3 GPA, volunteered at Miami Children’s Hospital, and organized blood drives at my school. I thought I was well on my way to attending college and then medical school and fulfilling my dream,” said Jasmin Qyyum ’11, an FIU alumna who graduated with a Bachelor of Science degree in biology and was a QBIC scholar.
Her father’s tragic 14-year battle with cancer convinced her that a career in medicine was on the horizon. However, her plans of going to college and becoming a doctor soon changed. “My parents needed me close to home to help out with my two younger sisters. And, my mother’s part-time job at an elementary school was bringing in the only income for my family. With three daughters for my parents to care for, I knew the cost of education would be too much,” Jasmin explained.

The Impact of Annual Giving

To help offset tuition costs, Jasmin focused all of her energy on applying for as many scholarships as possible. Thanks to support for FIU’s Annual Giving fund, Jasmin received a variety of scholarships that empowered her to pursue her dreams of a Worlds Ahead education.

“Not only was I able to enroll at FIU, my prayers were further answered when plans for the medical school were approved. All of a sudden, my dream of becoming a doctor was alive again! I am so proud to be an FIU student and a Golden Panther,” said Jasmin. 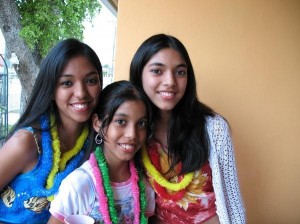 Jasmin is currently preparing to apply to the Herbert Wertheim College of Medicine in hopes of beginning this fall. Her younger sister Soraya is an FIU sophomore who plans to enroll in the College of Nursing and Health Sciences. Their youngest sister Samantha, a high school senior in the top three percent of her class at South Miami Senior High School, has been accepted to FIU as an incoming freshman and will begin this upcoming school year. Although their father passed away several years ago, she and her sisters persevered through their loss.

“FIU…offered me enough scholarships so I can have an education, so that I can have a future. It was FIU’s constant support that kept me going. It was the memory of my father. I feel like I owed it to him and I owed it to my family and I owe it to myself to make sure that I became a doctor,” said Jasmin with tears in her eyes.

As Jasmin continues to inspire others to overcome life’s setbacks, scholarship support from FIU alumni will provide transformative opportunities for worthy students like Jasmin to turn their dreams into reality. The Panther community encourages its alumni to give back to the University, so that the best and brightest of our region can receive a quality education at FIU.
Jasmin’s words speak volumes on behalf of many hopeful FIU students. “I’m very thankful to the donors that did donate the money to help me get through my four years of education. And I would really like to tell the prospective donors to please continue helping students like me and my sisters get through these four years, which are the foundation of what we want to do with our lives.”