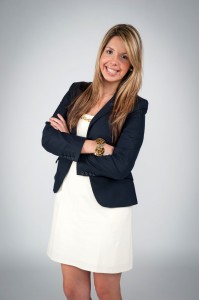 An FIU Development Officer in the Division of University Advancement and graduate student pursuing a master’s in Public Administration, Mykaelle “Myka” Figueiredo is a prime example of a student leader empowered to realize her dreams through scholarship support.
Recipient of a bachelor’s degree in Health Services Administration, Myka was heavily involved in campus leadership, serving as vice president, senator, and director of community relations and outreach of the Student Government Association (SGA). FIU’s 2010 Sorority Woman of the Year, Myka proudly represents her sorority, Phi Sigma Sigma.
Thanks to a scholarship from the Thomas B. Jelke Foundation in support of Greek leadership, Myka received the financial assistance needed to continue her studies at FIU.

In her own words, “Being awarded the Jelke Scholarship was a great relief during a very difficult time in my life. It also helped me realize that I wanted to help other students like myself have the financial support needed to obtain their degree.”

Giving Back to FIU

Inspired to help her fellow FIU students, Myka developed and chaired the First Annual SGA First Generation Scholarship Benefit in 2009. The catalyst of this annual student-led fundraiser – now in its third year – Myka has made a lasting impact on FIU’s first generation students who comprise nearly 40% of the University’s student body. The benefit has raised nearly $350,000 in three years, including state match.
After graduating from FIU in 2010, Myka was hired by University Advancement to continue fundraising for the event, and subsequently as a Development Officer working with the Herbert Wertheim College of Medicine, College of Nursing and Health Sciences and the Robert Stempel College of Public Health and Social Work. Selected as a 2012 HYPE Award winner in the “Rookie of the Year” category by the Greater Miami Chamber of Commerce, she recently assumed responsibility for the First Generation Scholarship Fund, overseeing university-wide fundraising efforts for FIU’s first generation students. In this role she will continue to make a lasting impact on the FIU community as a committed fundraiser and advocate of the FIU mission.
Grateful for the scholarship support she received as a student, Myka reflects the ability of scholarship funds to make waves of impact. In Myka’s words, “The Jelke Scholarship not only provided me the financial support I needed, but it [also] helped open my eyes to my career and calling.”
To meet a student impacted by the First Generation Scholarship Fund, watch this video and explore the fund’s Web site.

For more information on the SGA First Generation Scholarship Benefit:
http://news.fiu.edu/2011/04/sga-fundraiser-nets-120000-for-first-generation-scholarships/23287
To make a donation to FIU’s First Generation Scholarship Fund, matched 100% by the State of Florida, or to learn more about FIU’s first generation student body:
http://firstgen.fiu.edu
To learn more about the Thomas B. Jelke Foundation Greek Leadership Scholarship:
http://greeks.fiu.edu/wp-content/uploads/2011/07/2010_TomB.Jelke_Scholarship.pdf