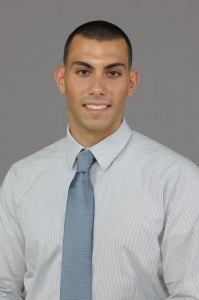 Dale Segal and the Herbert Wertheim College of Medicine

Dale Segal represents the Herbert Wertheim College of Medicine (HWCOM) with pride. A recipient of the FIU HWCOM Tuition Remission Scholarship, Dale has the support of the College to pursue his dream of becoming an orthopedic surgeon.

“Medical education is expensive and many recent graduates struggle in their early career to pay back loans. This scholarship will significantly reduce the financial burden after I graduate and give me more flexibility in choosing a residency and supporting my family and myself,” Dale said.

His journey to medical school began in Long Island, N.Y., where he developed an interest in science during high school and decided to pursue the pre-medicine path as an undergraduate. He graduated Summa Cum Laude from the University of Albany in 2010 and earned a bachelor’s in biochemistry and molecular biology. Before attending the Herbert Wertheim College of Medicine, Dale spent a year doing research at the Neurosurgery Department of Albany Medical Center, volunteering abroad in Ghana and traveling throughout Europe and South America. In 2011, he moved to Miami to begin medical school at FIU.
“I consider the [Wertheim] College of Medicine to be a second family. It is truly a privilege to be in this position,” Dale said. “FIU HWCOM has a progressive medical curriculum that I found to be appealing as an applicant.”

As the current president of the Neuroscience Interest Group and vice-president of the Orthopedics and Sports Medicine Interest Group, this second-year medical student enjoys working in the community. This past summer he was awarded the HWCOM Medical Student Summer Fellowship, which allowed him to conduct research on the development of glaucoma. Recognized at the Aesculapius Awards Ceremony for achieving high honors in his first year of medical school, he also participated in an American Medical Association conference where he had the opportunity to influence policy as a delegate of the College of Medicine.
The answer to “why medicine?” was simple for Dale. “It combines the satisfaction of patient care with my interest in basic science. The immediate results one can achieve in the field of surgery are especially appealing to me.… I have always admired surgeons and I look forward to having the opportunity to have a direct effect on my patients’ well-being.”
To date, approximately $1.7 million in HWCOM Tuition Remission Scholarships have been awarded since 2009. Dale is thankful for the wide spectrum of donors who have made the scholarship possible. “They have had a tremendous impact on my personal and professional life and I am so appreciative. I am certain any scholarship recipient would agree that it’s not only a great honor, but also a source of motivation to receive such a substantial award. I hope my gratitude will be reflected in my academic achievements,” he said.