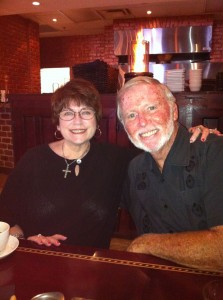 Many of today’s FIU students are unaware of the history of FIU’s Modesto A. Maidique Campus – a former airstrip and World War II flight training center. Building on this history, a small team of dedicated and visionary people, driven by an entrepreneurial spirit and a willingness to adapt and persevere, imagined the FIU we have today and spent their lives making it a reality.
Two of those visionaries are Thomas and Blanca Riley, both retirees of FIU. After investing a lifetime in the university, they recently pledged a generous $1 million estate gift to FIU, ensuring that their commitment will enrich FIU in perpetuity.

“Our institution is more than its bricks and mortar—it’s a lifetime of memories, knowledge and a world of humanity. For those of us that were here at the beginning in 1972, FIU has not only become part of our family, but it is also home,” said Blanca.

In recognition of the couple’s gift, FIU will name the Thomas and Blanca Riley Atrium in the new building of the School of International and Public Affairs (SIPA). The funds will establish the Tom and Blanca Riley Scholarship Endowment to provide support for SIPA’s undergraduate and graduate students.
“We hope through this gift to help further the educational goals of the institution and its students. In these hard economic times, every little bit helps, and education is one resource we cannot afford to lose,” said Tom.

Hired by former president Gregory Wolfe, Tom was charged with creating a true university environment for the fledgling institution. Former assistant vice president for Student Affairs and associate director for Academic Support Services, Tom also authored the definitive history of FIU, Beyond the Tower. Blanca worked at FIU from its opening in 1972 until 2004 and earned a bachelor’s (’74) and master’s (’80) degree in business along the way. She held just about every position imaginable at FIU, including director of space and planning and head of media and public relations, among others.
“Seeing the growth of the institution since the day it opened its doors has been significant in our lives. We would not trade any memory and the many friendships made during the years,” said Blanca. “The many roles we both played in those years allowed us to see the institution in ways that enriched us and made the connection stronger to our extended family. The fruit of our labor, along with that of many other good people, is visible in the success of our institution today. We are very proud of FIU.”
The gift will serve as a beacon for current and retired FIU staff members to remind them of the significance and impact of giving back to the university. Two pioneers of FIU’s growth and development will be recognized and memorialized in one of the university’s finest facilities.

“We are honored to still be part of the FIU family. We know it sounds cliché, ‘FIU FAMILY,’ but to us it rings true.  And after years of work, lasting friendships and accomplishments, we can truly say that we are among many that love the place,” said Tom.