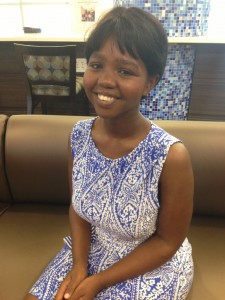 Senior hospitality management major, Mary Ondari, bravely pushed past the cultural norms of her native country of Kenya to forge a better future for herself. Over the past year, FIU has served as her ticket to a world of possibilities.

“Going to school gives people like me an opportunity to nurture our skills and talents or even develop new skills, so that we can contribute to the progression of our society. I am able to go to school because of the people who give to FIU. Those people make it possible for us to attain an education,” said Ondari, who left Kenya to come to the United States six years ago.

Her journey to the States had not been easy after she escaped a torturous mutilation rite of passage every young woman in the Kenyan community of Kisii must endure. Consequently, she was estranged from her family back home due to her defiance and the shame brought upon them. She lived in Minnesota with her older sisters for five years, trying to balance work and school while adapting to a new environment and culture.
After completing her associate degree at Anoka Ramsey Community College in 2011, she made the bold move to Miami to pursue her passion for the hospitality industry at FIU’s Chaplin School of Hospitality and Tourism Management, rated one of the best hospitality schools in the nation.
“The fact that it was in a warm city was the icing on the cake. I had never been here and I knew no one in this city, but once again I left everything and everyone I knew to follow my dreams,” Ondari said.

A Bright Future Ahead

Ondari has excelled tremendously at FIU, earning five awards in just one year: the Aventura Marketing Council Fellowship, as well as the José Martí, Deborah L. Nathanson, Hilton Worldwide, and American Hotel & Lodging Educational Foundation scholarships – quite an accomplishment given that she had never before received a scholarship.
“I came to FIU as an out-of-state student. My tuition is very high and even financial aid doesn’t cover the cost. These scholarships have lowered my financial burden, allowing me to stay in school,” said Ondari, who currently works as a student assistant to the director of development at the Chaplin School.

“I would like to thank the donors for their support. They have made a difference in my life and I hope to honor their generosity and kindness by doing good with the education I receive and helping others in the future,” she said.

Of teachers, mentors, and friends who have played a key role in her success, she said, “I am still here because so many people along the way reached out and offered advice or listened or sent help my way. For that I am grateful.”
After graduation, Ondari hopes to become a manager-in-training with an international hotel group in the United Arab Emirates, obtain a master’s in International Business, and eventually manage an eco lodge at one of Africa’s safari destinations.