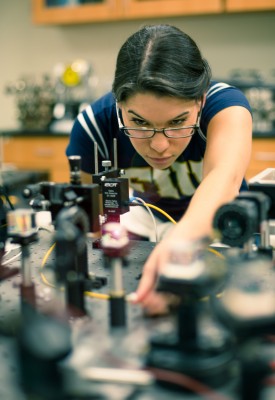 “Over the last few years we have put in place a number of programs to help our students – 63 percent of whom are Hispanic – pursue and succeed in STEM disciplines,” said FIU President Mark B. Rosenberg. “Our institutional commitment to STEM has started to bear fruit and we expect even greater gains in the coming years.”

In 2010-2011 FIU awarded 753 bachelor’s degrees and 154 master’s degrees in STEM disciplines to Hispanics. By 2014 the number of graduates had increased to 949 and 258, respectively. That year 38 percent of Hispanic STEM graduates were women.
One of the keys to success in STEM is doing well in college algebra, which traditionally has proven to be a roadblock for many students.
The introduction of the Math Mastery Lab, which employs technology, as well as 30 full-time learning assistants to work one-on-one with students, has resulted in a 33 percent increase in the college algebra pass rate. The performance of students who take the same class online has improved even more: 65 percent now pass the class.
FIU also launched the STEM Transformation Institute to support students and develop teaching strategies that advance learning.
“We have moved away from lectures and are focused on making learning experiential and replicating the practices of scientists, mathematicians and engineers in many of our courses,” said STEM Transformation Institute Director Laird Kramer. “Science is messy and frustrating but working through it is the best way to learn and appreciate what it’s like to be a scientist.”
The focus on providing students experiential learning opportunities also drives the creation of partnerships with local economic development agencies and industry leaders that result in internship opportunities for students, which are critical to getting jobs.
According to the National Association of Colleges and Employers 63 percent of paid interns received at least one job offer after graduation, while only 37 percent of unpaid interns got an offer.
Tags: College of Arts & Sciences × College of Engineering & Computing × Excelencia en Educacion × Mark B. Rosenberg × math mastery lab × School of Integrated Science and Humanity (SISH) × STEM × STEM Transformation Institute
This post “Looking to hire Hispanic STEM graduates? FIU a top producer of science and engineering talent” was originally published on FIU News.