Oceanographer David Kadko has been to the Arctic Ocean several times over the course of his career, but on Aug. 9 he left for one of the biggest undertakings and international collaborations in the history of Arctic research.
Kadko, a professor and associate director of the Applied Research Center at FIU, is the chief scientist of a multimillion-dollar U.S. Arctic GEOTRACES initiative. He is leading a team of 51 scientists, students and technicians conducting experiments that will help provide the most comprehensive understanding of the Arctic’s chemical composition ever.
The initiative to map out the geochemistry of the Arctic Ocean is part of an international, collaborative effort between the United States, Canada, Germany and scientists from several other nations. Each country will be collecting samples and providing analysis for different regions, aboard separate icebreakers – which are special-purpose ships able to navigate ice-covered waters and provide safe waterways for other ships. 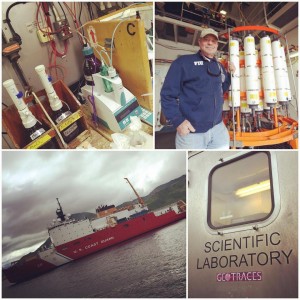 The international initiative marks the first time that coordinated geochemical measurements will be performed in the Arctic Ocean. The U.S. team, led by Kadko, departed from Dutch Harbor, Alaska, on Sunday aboard the U.S. Coast Guard icebreaker HEALY. The 140-person crew will spend 65 days sailing through the western Arctic Ocean conducting 48 separate research projects, according to the NSF.

“The Arctic has been an understudied system because it is an extremely harsh environment that is hard to get to,” Kadko says. “It’s very exciting and gratifying that three separate nations can come together and cooperate for this project. In the end, there will be a huge archive of data that scientists will be using for decades to come.”

From their designated region, Kadko and his team will be taking samples from the ocean surface to the sea floor, the atmosphere, ice, snow and sediments; they will then measure the amounts of various trace elements and isotopes – which include micronutrients such as iron, zinc and cobalt that are essential for life, and toxic contaminants such as arsenic and copper.
Robert Anderson – a research professor in the Lamont-Doherty Earth Observatory at Columbia University and former co-chair of GEOTRACES, the international program that tracks trace metals through the world’s oceans – says the processes that impact the distribution of these nutrients in the Arctic Ocean could impact the ocean’s ecosystem in significant ways.
“We want to understand how the Arctic ecosystem and the base of the food web –the phytoplankton that feed all of the higher organisms in the Arctic Ocean – get the nutrients that they need,” Anderson said.
By analyzing and interpreting the samples they collect, Kadko hopes to gain an understanding of the current biogeochemical distributions – or “fingerprints” – of the Arctic Ocean, resulting in an understanding of its chemical nature.

“The distributions of chemicals in the Arctic are there because of processes that put them there,” Kadko says. “By interpreting these fingerprints, we get to know more about how the Arctic operates today.”

The team will help establish baseline levels of trace elements, isotopes and contaminants found in the Arctic today to compare against future conditions.
Climate change continues to impact the region and a number of countries are developing plans to expand shipping, oil drilling, fishing and other forms of industrial development in the Arctic. The expedition’s findings will ultimately help scientists and policy makers get a clearer picture of how different factors could affect the future geochemistry of the ocean, specifically with the increase of greenhouse gases.
“Certainly in 20 years, the geochemistry of the arctic will be different,” Kadko says. “There will be less ice and probably be more economic development in the Arctic, so we want to know how much of an impact those changes will have on the Arctic compared to what we have today.”
Tags: Applied Research Center
This post “FIU professor leading historic Arctic research expedition” was originally published on FIU News.
To stay up-to-date on this Arctic expedition, click here.