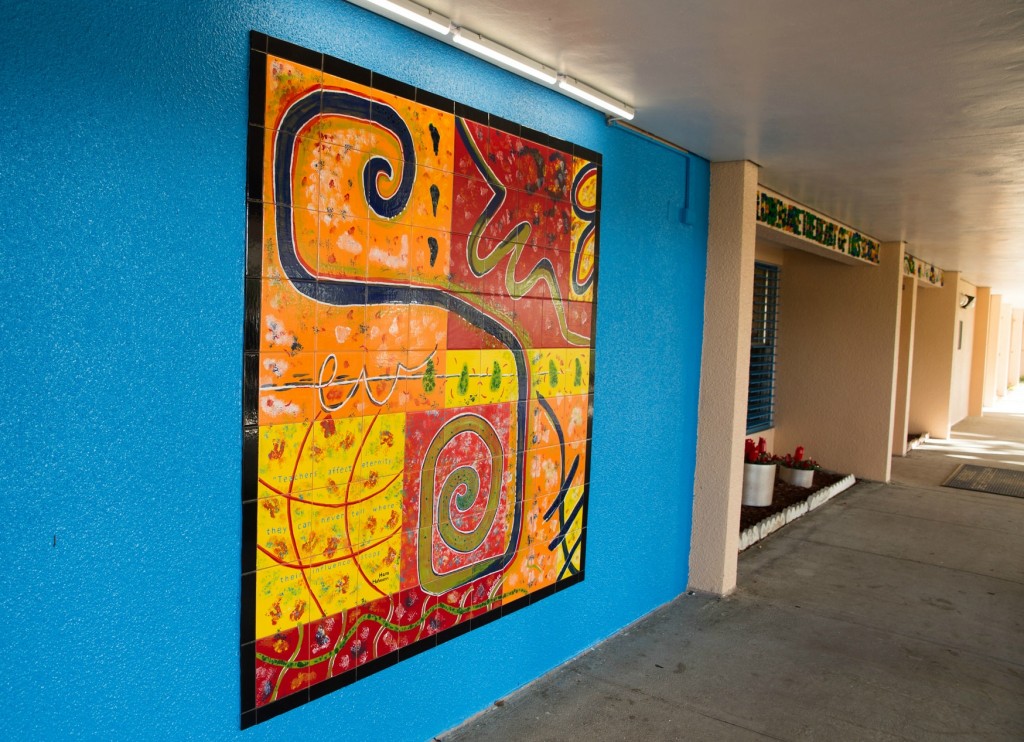 Inspired by an art exhibit currently on display at the Frost Art Museum, students at Sweetwater Elementary School worked together to create a mosaic tile mural in the style of artist Hans Hofmann.
The mural, which was created as part of a school-wide project funded by the Frost Art Museum, is now a permanent fixture on display at the entrance of Sweetwater Elementary.

“This started as a project to really use FIU and Frost resources to enhance the one hour of art kids get per week,” said Miriam Machado, the Chief of Education at the Frost.

The mural mimics Hofmann’s style, abstract expressionism. Upon closer inspection, it contains subtle letters—S, W and E, for Sweetwater Elementary—designed by the students using abstract swirls and squiggles.
The piece also features a quote from Hofmann, who spent his life teaching before becoming an artist at the age of 76: “Teachers affect eternity; they can never tell where their influence stops.”

“I look at this mural every day, and I’m in awe,” said Sweetwater Elementary Principal Janet Olivara at the mural’s unveiling in December. “I know our children are unbelievable, but this is beyond my wildest dreams to have something that will go on as a legacy for this school.”

Making the mural was not just an artistic endeavor; it was a cross-curricular effort incorporating many subjects into the project. Throughout the process, students researched the history of Hofmann’s era and his style; they learned about jazz, one of his major influences; and they even included science by comparing Hofmann’s push-pull theory (how warm and cool colors work together in art) to magnetic polarity.
“Everybody participated, and everybody learned something about Hofmann,” Sweetwater Elementary art teacher Marlene Martinez said of the project. “By chance, another teacher was teaching about abstract nouns, so we put abstract nouns in the painting. We tried to relate everything.”
At the unveiling, Machado spoke about one student whose whole attitude transformed because of this project.
The student came into school one morning with a poster he drew in Hofmann’s style, on which he wrote about his excitement for art—a project he made of his own accord; it was not an assignment.
“After that, his behavior really changed in my class,” Martinez commented. “Now he’s one of the best. He behaves really good, and follows directions. And he’s excited about art.”
Machado said another reason the Frost wanted to get involved at Sweetwater Elementary was to encourage the children’s families, many of whom had never been to a museum before visiting the Hofmann exhibit, to see the Frost “not as an ivory tower,” but as a place just across the street where parents can go to learn with their children.
“For us as a museum, we have so many things to offer the community,” Machado said.


At the unveiling, the students presented Machado and FIU President Mark B. Rosenberg with their own tiles from the mural to commemorate the partnership between the Frost and Sweetwater Elementary.
Rosenberg commented that the kind of cross-curricular, project-based learning that went into the Hofmann project can transform the way students engage in other kinds of classroom material, as well.
“Imagine how smart you will be in learning the way you learned about Hans Hofmann,” he told the students.
For Olivara, this partnership with FIU is important because it exemplifies one of the school’s core values: collaboration.

“The children are the heart of this school,” said Olivara, “and when you see this work and the collaboration that all of you have put together, you’re going to see how this is really about the children of this community.”