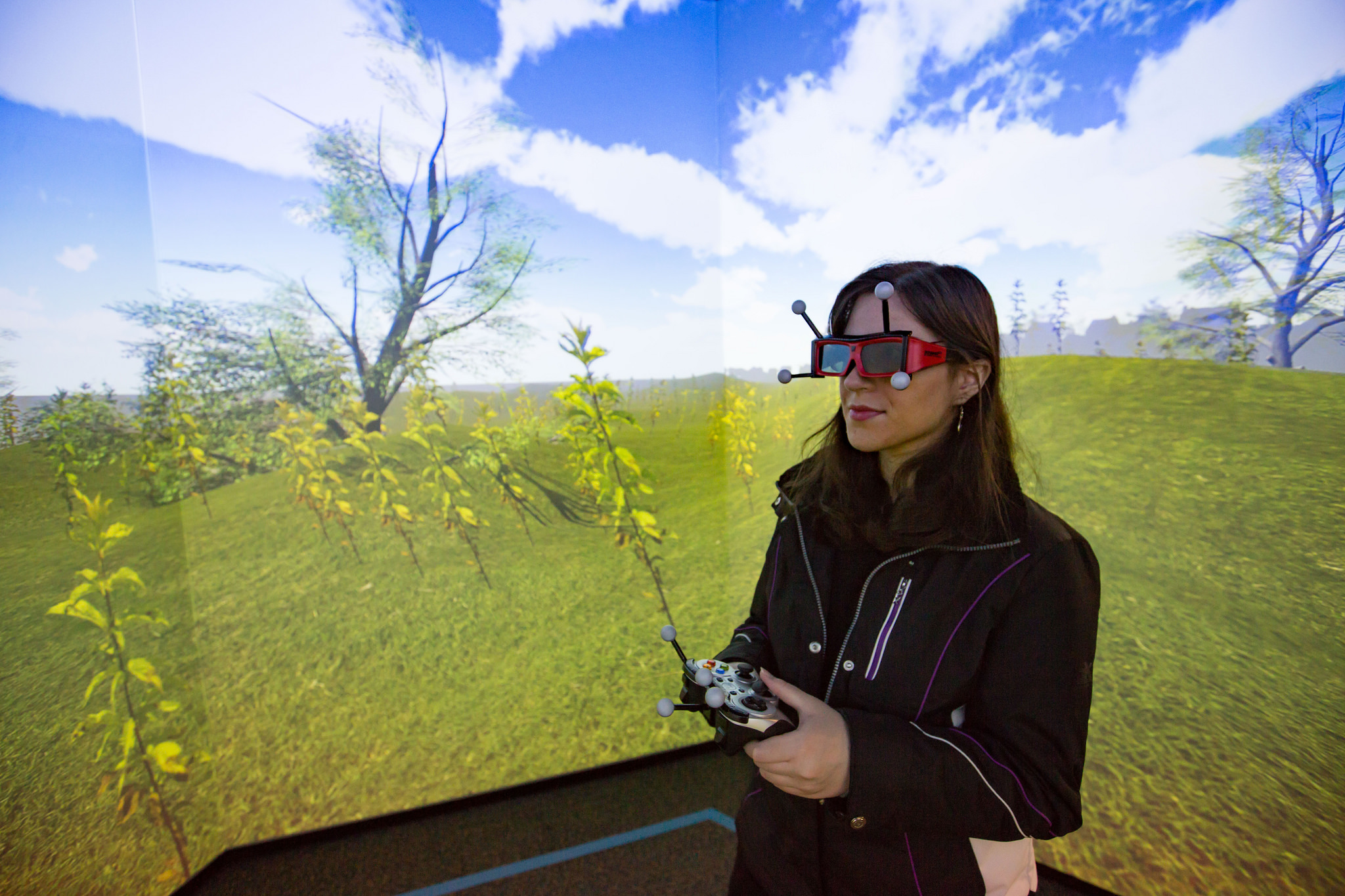 It’s 1598, and you’re on your way to the Globe Theater to watch one of Shakespeare’s plays. You walk along the dirt roads and the green fields of London and you realize you can see the London Bridge in the distance. A vagabond asks you for a coin, and you find the village houses and the town market bustling with customers. Once you arrive at the theater, you watch the first few minutes of the opening monologue of “Henry V.”
This is a virtual world created by a multidisciplinary team of FIU students – and you can immerse yourself in this time-travel journey starting Jan. 29 when the I-CAVE opens at Modesto A. Maidique Campus.
The I-CAVE, short for Integrated Computer Augmented Virtual Environment, is a new facility composed of five 9-by-5 foot, high-resolution screens arranged in a hexagonal pattern. Visitors are given goggles and a remote control to navigate a virtual world. The first project to be featured is Shakespeare’s London circa 1598, which will kickoff a series of campus events celebrating the Folger Shakespeare Library’s national traveling exhibition First Folio! The Book that Gave Us Shakespeare presented at the Patricia & Phillip Frost Art Museum. The First Folio exhibit opens Feb. 2.

“The goal of the project is to recreate the experience of what it must have been like to see a play in Shakespeare’s era,” says David Frisch, the project manager and a graduate student in English Literature.

Many students may assume that watching a play in Shakespeare’s time was an aristocratic, high-brow, quiet activity but Frisch says, Bankside – a southern area of London in which the Globe Theater was located– was a lot like today’s Las Vegas. “It was loud. It could get rowdy and crazy, and people would throw tomatoes at performers during plays.”
Although the team took creative liberty re-imagining Bankside, Chairperson of the English Department James Sutton says there are many historical points. The location of the theater, which was burned down in 1613 and later rebuilt across the Thames River, is accurate to the original site.
For a touch of authenticity, the students also decided their cast of characters –including a Spanish merchant, vagabond, prostitute and “snobbish English man” – would consist of 2D cut-outs taken from early modern works of art. 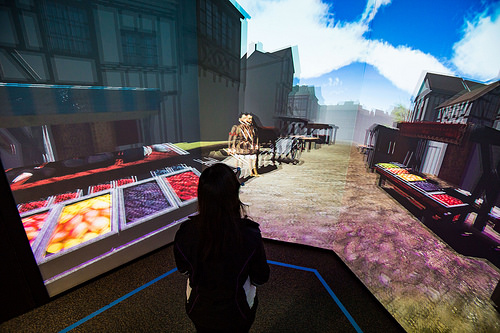 Frisch says he hopes the project informs, educates and makes accessible Shakespeare to people who use the I-CAVE, particularly Florida high school, middle school and even elementary students who will be visiting campus to learn about Shakespeare.
“It’s the perfect balance to see the First Folio and the gallery and then have them [the students] in this immersive environment,” Sutton says.

He adds: “It’s great to see FIU students from all kinds of disciplines from the sciences to the arts mess with technology and come up with this mind-blowing thing.”


A team of Architecture students, including David Pinto and Cristian Garcia, created 3D models of 1598 Bankside. They researched historical drawings and anatomy models for inspiration. Then, computer science students Jose Maldonado and Leonardo Guibert programmed the interactions that occur between the environment and the user, bringing the 3D models to life and adding color and texture to the environment. Theater students gave voice to the characters.
Once an environment is designed, it is input into Unity, the 3D animation program compatible with the I-CAVE. A main user wears virtual reality goggles and navigates the environment with a remote control; three others can tag along and see everything, but only the main user’s glasses have motion sensors that react to his or her body movements in real time using four cameras.

I-CAVE Co-Director Shahin Vassigh, associate dean of faculty development at the College of Architecture + The Arts (CARTA), says the new facility is an incredible teaching environment. “You can make a 3D model of anything. There is nothing like this in South Florida.”
For example, researchers, scientists and programmers could design a model of a molecule and create settings that let users zoom into parts of the molecule, access audio that explains information and other instructional material that enhances the learning experience.
Both faculty and students can request to use the I-CAVE for class trips and projects. Graduate students, in particular, can conduct research using the interactive technology.
Shu-Ching Chen, co-director of the I-CAVE and professor of School of Computing and Information Sciences (SCIS), hopes to bring a previous project to the I-CAVE screens. A few years ago, he used data provided by NOAA to create 3D animation videos of real-life hurricane storm surges in Tampa, Key Biscayne and Miami Beach. The videos were used by the National Weather Service Tampa Bay Area Office at several public outreach events.
Starting in February, the I-CAVE – maintained and run by  CARTA and SCIS and funded by the FIU Tech Fee grant – will be open to the public for 10 hours per week (times will be posted on the I-CAVE website) in ECS, room 268.
The Globe Experience project will run through Feb. 29.