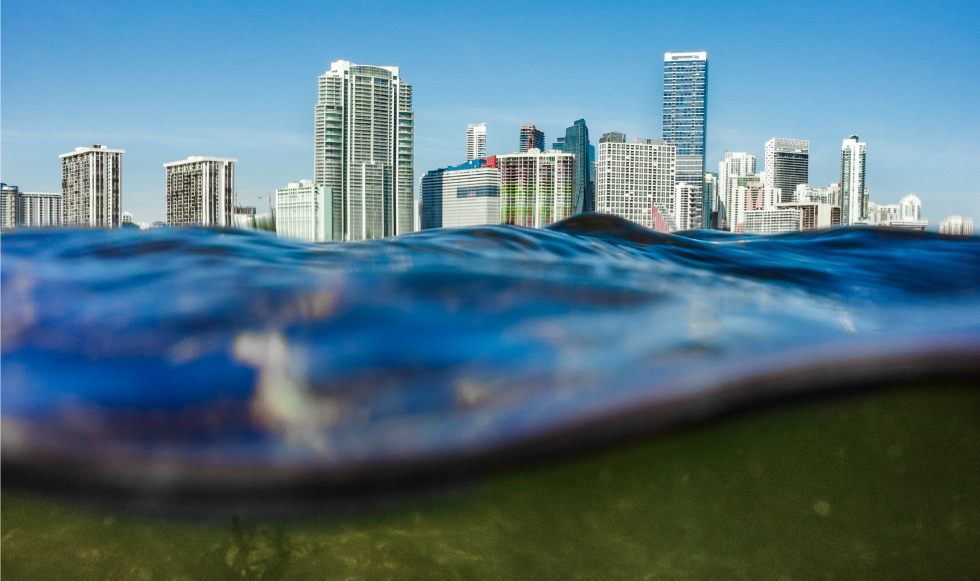 Tiffany Troxler takes a right turn from Miami Beach’s Purdy Avenue onto 20th Street and spots her destination, a perfect example of the consequences of sea level rise.

“Right there,” she says. “Do you see the two steps leading into the Publix? It used to be seven steps.”

It’s hard to fathom it, looking at the stairway, just a couple long, black-and-gray tile steps leading up to the entrance of the supermarket. But the city of Miami Beach has built up the road so high to prevent flooding that the staircase had to be shortened by five steps. Troxler points out other buildings that now sit several feet below the new street level; stairways now lead down to their entrances, patios and front walkways. New drains to funnel away water sit near doorways. Then Troxler points to an industrial-looking, squat structure smack in the middle of the road, bannisters directing traffic around it.

“And that is a pump station. It will be one of 60 pumps all around the beach,” she says. During high tides and heavy rains, when many Miami Beach neighborhoods used to end up swamped, the new pumps should keep the streets dry by pumping out 14,000 gallons of water a minute.

This novel approach to keeping the ocean from swamping neighborhoods is exactly the kind of thing Troxler is working on in the new FIU Sea Level Solutions Center. The goal of the center, above all else, will be collaborations and tangible solutions to combat the effects of global climate change.

It’s a far more optimistic message than the one coming from some scientists, who have predicted South Florida will become unlivable in a century or less. Consider the 2013 article in Rolling Stone that imagined a future where a hurricane has left Miami under water, nothing more than an adventure vacation for scuba divers.
Troxler sees a far better future where FIU can help to prevent that dystopian vision.

“We’re trying to creatively plan to do what we can now and also figure out what we need to do in the future,” she said.

‘Unlike anything the world has faced before’
Across the university, researchers are seeking answers and developing strategies to ensure South Florida not only perseveres but also serves as an international model for how to adapt in this changing landscape. Their work reaches far beyond the shoreline. For South Florida, trouble also lurks within. The porous limestone beneath our feet makes it easy for

salt water from the ocean and bay to intrude into the aquifer that supplies much of the region’s drinking water. FIU ecologist Todd Crowl knows this intrusion is creating a hidden peril.

“The greater South Florida ecosystem is predicated on the balance of fresh water and salt water. When that ecosystem hits its tipping point and an imbalance occurs, that is when this whole thing collapses,” he warns.

Crowl arrived at FIU in 2014 to unify and expand research initiatives focused on two highly threatened resources — water and the environment. His efforts have been formalized under the newly created Institute of Water and Environment, which includes the Southeast Environmental Research Center, the scientific work in the Sea Level Solutions Center, as well as a variety of other research groups. The collaborations are about more than the science, though there is plenty of that to go around. Researchers are expected to share what they know with local officials, develop research programs that respond to community needs and engage people of all ages to be part of the solution to the world’s environmental challenges.


As a child growing up in Ohio, Crowl had a front row seat to a major environmental disaster. After being subjected to decades of industrial pollution, the Cuyahoga River caught on fire. That single event, which sparked a nationwide environmental movement, set Crowl on a path of environmental preservation. Over the years, he came to realize that the scientific reasons for why the fire started were very easy to understand. But how people could let the pollution get so bad in the first place was harder to comprehend. Water samples and data sets could not provide an answer. It is why, among a variety of scientific degrees adorning his resume, Crowl also possesses a degree in philosophy. He knows real solutions to complex problems require values and reason to be combined with science and ingenuity. That is why you will find artists, sociologists, writers, biologists, ecologists, architects, engineers and others working side-by-side on the issue of sea level rise at FIU. It is a framework Crowl helped to develop.
The circumstances of sea level rise are unlike anything the world has faced before. There is no isolated disaster. It is a slow, seemingly unstoppable force. Both natural and built environments are at risk. Small island nations and major metropolitan cities are in the path. Globally, we are in this together.

Tackling this together
For FIU, that means every college and school has been activated on the issue. Researchers from nearly every discipline are contributing to the body of knowledge, examining causes, effects, predicted outcomes, best-case scenarios, worst-case scenarios and everything in-between. Students are being deployed during high tides to collect data. Teams of journalists are working to develop communication tools that help residents understand what is happening today and what is likely to happen to their neighborhoods in the future.
FIU architects and engineers are designing new innovations that could change how we construct homes, office buildings and infrastructure. Agroecologists are exploring food supply impacts. Experts in business, law and tourism are engaged. Scientists are developing effective water management strategies and storm-surge models. After all, natural disasters will continue to be part of the equation.
Bringing it all together, the Sea Level Solutions Center has quickly become the main communications vehicle for all sea level-related research at FIU. Researchers within the center are collaborating with local governments, businesses and community leaders to accelerate adaptation planning. Faculty members are helping to advance the Southeast Florida Climate Change Compact — a formal agreement among Palm Beach, Broward, Miami-Dade and Monroe counties to work together to fight climate change. FIU and the City of Miami Beach have also developed a partnership that provides internship opportunities for students in support of adaptation efforts. And for the first time, FIU is offering an interdisciplinary class dedicated to long-term infrastructure and social resilience within specific communities. During the spring semester, students have dedicated their coursework to studying historic Virginia Key Beach.
The Sea Level Solutions Center is not an advocate for combating the effects of sea level rise – that argument is over, according to Troxler. Instead it will be a hub for information.

By Eric Barton and JoAnn Adkins | Photos by Doug Garland ’10

Read more about Troxler’s class on infrastructure and social resilience