On December 29, 2016, one of our Advancement team members, Joaklin Raphael, received a special honor. For his outstanding work, Joaklin was recognized by FIU President Mark B. Rosenberg with a Presidential Salute. Read President Rosenberg’s full letter to the university community below, and join us in congratulating Joaklin! 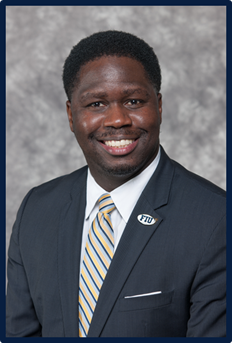 Dear University Community,
Please join me in recognizing Joaklin Raphael for his admirable dedication and commitment to delivering excellent service to the FIU community. On July 7, 2005, Joaklin began his FIU journey as a Student Assistant for the Office of the Provost. In 2009, he joined the Advancement team and has since then been promoted to Development Officer.
His supervisor and nominator, Dr. Stephen Fain, Chair of the Ignite Campaign, attributes much of the Campaign’s success to Joaklin’s dedication and passion. He noted that during the time Joaklin has been part of the team, significant increases in the number of projects have been recorded, with a 34 – 50 percent increase in participation. Joaklin is a major force behind most of what the Ignite Campaign has accomplished and with his contributions, he has assisted with bringing the Campaign’s five year total to more than $11 million.
Dr. Fain shares that Joaklin “regularly demonstrates empathy, respect and professional skill in responding to virtually every concern raised by members of our community related to the Campaign. He is available to assist any unit seeking guidance in developing a program to raise and maintain participation, and he is always at the forefront of celebrations of unit successes. Joaklin is truly a team player who is always ready to go the extra mile.”
Meet Joaklin and you will clearly see his exemplary passion for our great University. We are proud and grateful to have him as part of the FIU Worlds Ahead family!
I look forward to learning of the next candidate for the Presidential Salute.  If you know someone deserving of this recognition, please let us know. To submit your nomination, please click here.
Sincerely,