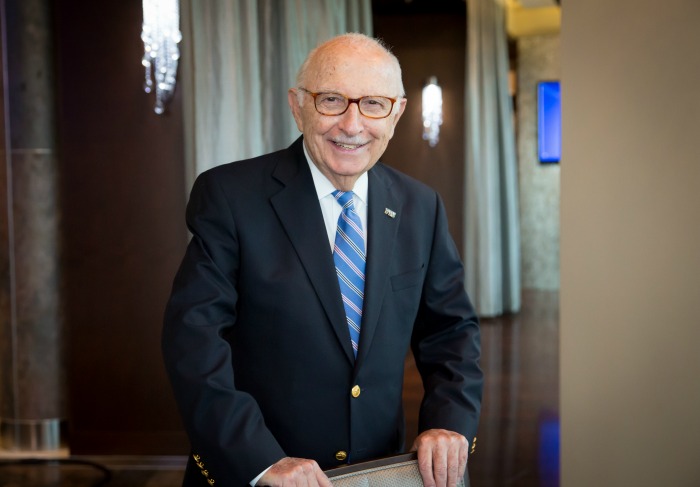 Alumni of the FIU Chaplin School of Hospitality & Tourism Management have donated more than half a million dollars to a fund that honors their beloved professor Rocco Angelo, an associate dean who has mentored generations of hospitality students and helped them succeed.
Three alumni are leading the way: Burt Cabañas, founder and chairman of BENCHMARK®, a global hospitality company; Regynald G. Washington, CEO and member of the board of directors of Hojeij Branded Foods; and Eric Pfeffer, founder and president of The Pfeffer Group.
Washington and Pfeffer donated $100,000 each to the Rocco Angelo Legacy in Leadership Campaign, and Cabañas matched both donations. So far, the campaign has raised $600,000, which will fund scholarships, mentoring programs, career services, student enrichment opportunities, and help with recruitment initiatives and alumni engagement efforts. The goal is for all alumni of the Chaplin School to get involved.

“As an educator, the greatest gift is to see your students succeed beyond their wildest dreams and then leverage that success to give the same opportunity to the next generation,” said Angelo, who at 85 still goes to work every day. “I am proud of Burt, Regynald, Eric and all of the alumni who have and will contribute to this campaign.”

Pfeffer, who graduated in 1977, is among the alumni with a story about how Angelo changed his life. After graduation, Pfeffer was weighing job offers from The Plaza Hotel in New York and Howard Johnson in the Orlando area. The Howard Johnson position made more sense for his growing family but he was conflicted, until Angelo weighed in with advice.
“He said the following: ‘Eric, do not be blinded by the glamour. Someone has to be president of Howard Johnson,’” Pfeffer recalled.
Pfeffer accepted the Howard Johnson assistant manager position and did, in fact, rise to become president of what was then the 10th largest hotel chain in the United States. Now he is challenging other alumni to give back.
“What better way to celebrate Rocco’s life than to support the endowment that will benefit Chaplin School’s students in the future?” Pfeffer said. “I am a perfect example of a student whose life was forever changed by Rocco’s advice at a major crossroad in my career. I challenge all my fellow alumni to honor Rocco’s legacy by contributing to this campaign.”
Washington, who graduated in 1974, and Cabañas, a 1976 graduate, have answered that challenge. Washington wrote a check after hearing Pfeffer praise Angelo at a dean’s advisory council meeting.
“Listening to Eric’s story, I felt the impetus to contribute to Rocco’s campaign,” Washington said. “Like Eric and other alumni, I benefited enormously from Rocco’s guidance and vision for the future.”
Cabañas was originally going to donate $25,000 but committed $200,000 after Washington and Pfeffer committed themselves to the campaign.

“A legend in the hospitality industry, Rocco Angelo has personally led thousands of students and alumni on their academic and professional paths to success,” Cabañas said. “It is our responsibility as well as our privilege to honor Rocco by giving to the campaign. This is our chance to show our gratitude.”