It’s not every day that students can put their training to immediate use on campus, but social work majors had an unexpected chance to flex their skills in the aftermath of Hurricane Irma. Five of them interacted with Monroe County residents who evacuated to a special needs shelter at MMC.

“This is a wonderful opportunity to see the practical application of social work,” said Cdr. Scott Eppler of the United States Public Health Service (USPHS), which operated the shelter.

A licensed clinical social worker, Eppler is based in Fort Riley, Kansas, where he helps combat-traumatized soldiers transition to civilian life. He showed the students around and discussed the work of the USPHS, a corps of commissioned public health officers — doctors and nurses as well as mental health and other professionals — who are pulled from their day jobs at federal agencies to serve in disaster situations. 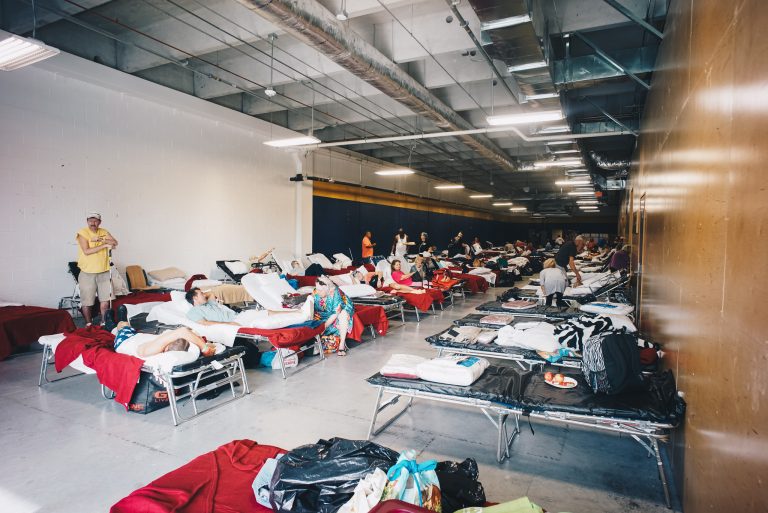 At peak the shelter housed as many as 100 individuals, all of whom had either pre-existing medical conditions, such as cardiac and respiratory problems, or were elderly and restricted in their mobility. Beyond providing evacuees with medical care and assisting them with bathing and feeding as needed, USPHS staff spent time engaging with anyone who wanted to share fears and anxieties — emotions commonly experienced by people who are dislocated.

“It’s one thing to have a lecture on disaster behavioral health or show slides, but it’s something to actually see it,” said Mark J. Macgowan, an associate dean in the Robert Stempel College of Public Health & Social Work, who brought over the students. “These folks have been displaced, been out of their homes for a while,” he explained of the affected population. “They’re frustrated, maybe getting angry.”

Macgowan knows firsthand the importance of having specialized clinicians at the ready in times of disaster. He deployed to Houston with Florida’s Disaster Medical Assistance Team immediately following Hurricane Harvey’s touchdown in Texas last month. He also has been contacted to work with the Florida Department of Health to add a mental health component to the state’s disaster response-and-recovery plan.
The FIU students already had experience working with families in low-income areas of Miami-Dade County through the university’s Green Family Foundation Neighborhood HELP program. Regular client visits through that initiative were suspended in the aftermath of Irma — although calls were made to direct those in need to FEMA and other resources — so access to the shelter population provided a great learning opportunity in the interim.
“It gives [students] a different perspective on the routine mental health services that we might be training them to do,” Macgowan said. “This is entirely a unique environment in which there are unique problems, unique challenges but also unique ways of responding and intervening.”
Master’s student Laura Dnis grasped the importance of taking time, however brief, with the shelter residents, the last few dozen of whom were making arrangements to move out early this week. (The shelter has since welcomed 100 special needs evacuees from the U.S. Virgin Islands.)

“I think sometimes in situations like this, the listening might just be the only thing you can do,” Dnis said of her exchange with evacuees, who mainly expressed worries about the condition of their homes. “Just giving them that ear.”

Exposure to the work of the USPHS — which follows a rank structure and is overseen by the U.S. surgeon general — gave the FIU students an insight into career opportunities. They heard about the organization’s mission and how teams come together to deploy in times of crisis.
“I didn’t know this existed,” said Alfredo Brizuela, a senior who is also an Army veteran. “Part of me really misses the service, and this seems like the perfect opportunity. I [would] get to be in the service kind of, but I don’t have to be away from my family so long.”
This post “Social work students offer a listening ear to hurricane evacuees” was originally published on FIU News.