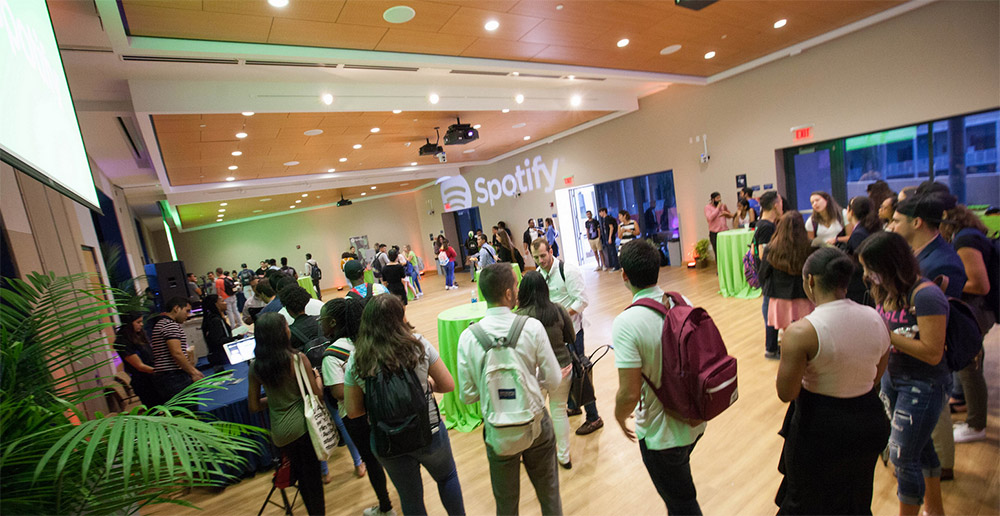 On a quest for dynamic college students as interns and student ambassadors, Spotify executives arrived at FIU’s College of Business with a DJ mixing the latest hits and lighting effects headlining its #jointheband event.
A partnership with COB’s Career Management Services, it was Spotify’s first event at FIU.

“We want to invest in student talent from FIU,” said Travis Robinson, director of global talent acquisition + diversity & inclusion at Spotify. “We believe this talent to be really sharp.”

The event at the College of Business was designed to attract students for paid internships in technology, content creation, marketing and engineering, and later transition them to full-time employees.
“It’s a playful, fun way to give students a snapshot of what it would be like to be an employee at Spotify,” said Robinson. “My job is to tell the story of Spotify and bring back stories of talent that can make a cultural impact.”

Now the world’s largest streaming service, Stockholm-based Spotify is a $3 billion-plus business that tops 140 million users worldwide, with at least 60 million paying subscribers.
COB senior Sam Vivas was recently hired as a student ambassador for Spotify’s first-ever “Street Team” in the U.S. He is one of six students from various universities — FIU, UCLA, UC Berkeley, Morehouse College, and Howard University.

“Spotify is super relevant and it’s a fun company to work in,” said Vivas, who will receive a bachelor in management in spring 2018. “You have to put yourself out there and be ready to network.”

This post “Spotify mixes music and careers with FIU College of Business students” was originally published on BizNews.fiu.edu.