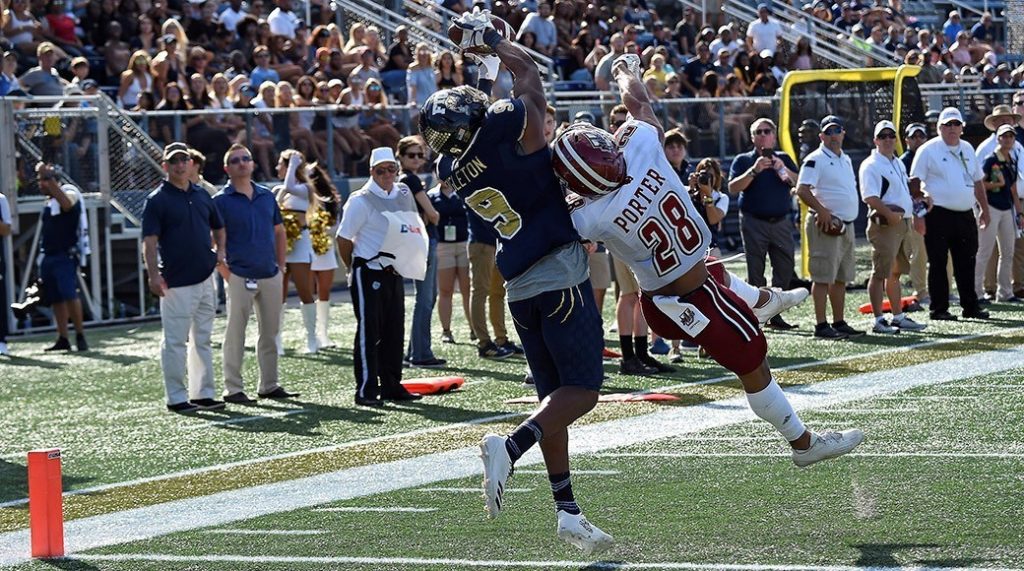 FIU is headed to the postseason in record-setting fashion after dismantling UMass, 63-45, on Saturday afternoon at Riccardo Silva Stadium.
The Panthers (8-4) broke several program offensive records stampeding to their eighth win of the season tying the 2011 team for the most wins in an FIU season.
Now the Panthers look to establish a new program record for wins as they await their bowl game destination announcement on Sunday.
FIU scored a program record-breaking 63 points and amassed a program record 674 total yards in erasing two frustrating losses to UMass (4-8) in the last two years. The Panthers scored seven times in seven red zone trips against the Minutemen. FIU has scored 39 times in 40 red zone trips this season — which is second in the nation. Entering Saturday’s play, only Georgia has been better in the red zone with 44 scores in 45 trips.
On an 80 degree hot December afternoon, the Panthers wore down the Minutemen with 379 rushing yards, which is the third most rushing yards in a single FIU game. The 2010 FIU team rushed for 448 yards in a win against Troy. FIU rushed for 391 yards against Jacksonville in 2003.
FIU turned a four-point lead in the late stages of the third quarter into a 25-point cushion with 9:02 left in the game.
The Panthers buried the Minutemen on the ground and through the air.
With FIU ahead 35-31, quarterback Alex McGough had the UMass defense bite on a read-option play and sprinted 60 yards for the touchdown. It was the longest run of the senior quarterback’s career.
McGough’s rushing touchdown also broke the FIU single-game team record for rushing touchdowns. At that point in the game it was the fifth FIU rushing touchdown of the day, which broke the record of four rushing scores in a game done nine times by an FIU team, most recently in 2014 against Florida Atlantic.
Exactly like running back Alex Gardner’s 108 yards, McGough finished with 108 rushing yards – just the third time an FIU quarterback has rushed for more than 100 yards in a game. Former FIU quarterbacks Jake Medlock (144 yards vs. Akron in 2012) and Wayne Younger (124 yards vs. Arkansas in 2007) have the top two spots among FIU quarterbacks rushing in a game.
Early in the fourth quarter, FIU’s special teams and defense spurred the offense to two more touchdowns.
FIU cornerback Brad Muhammad blocked a 23-yard field goal attempt by Logan Laurent. One play later McGough connected with freshman Shermar Thornton on a 31-yard pass play to the UMass 34. On the next play, McGough found another freshman, Bryce Singleton for a 19-yard touchdown. FIU led 49-31.
On the ensuing UMass possession, Minutemen quarterback Andrew Ford was intercepted by Bryce Canady at the UMass 45.
Three plays later, Napoleon Maxwell ripped off a 28-yard run to the UMass 2. McGough threw his third touchdown pass to Singleton on the next play to extend the FIU lead to 25 points. McGough was 20 of 25 for 295 yards.
When Jose Borregales kicked the extra point the Panthers eclipsed the program record for points in a game with 56. The previous mark was 55 in a 55-12 FIU win over Jacksonville in 2003.
Singleton, who had a career-high 111 receiving yards, set an FIU freshman record with three receiving touchdowns in a game.
Singleton tied the FIU record held by former FIU and current Tennessee Titans tight end Jonnu Smith, who scored three receiving touchdowns against Middle Tennessee in 2014.
FIU capped off its scoring on a 1-yard Maxwell plunge with 2:28 left in the game.
Linebacker Anthony Wint led the FIU defense with eight tackles and two fumble recoveries.