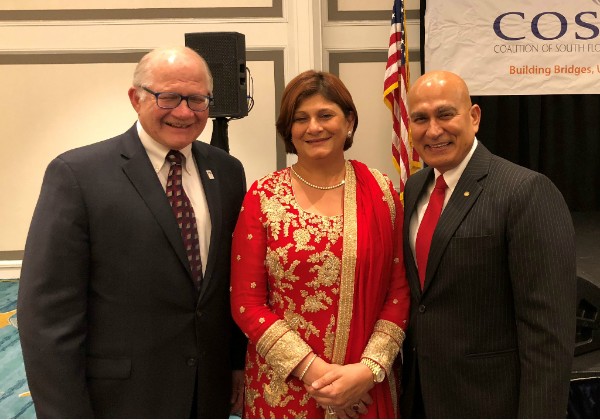 To promote greater understanding of the global Muslim community, Mohsin and Fauzia Jaffer, longtime supporters of Middle East studies and other programs at FIU, have donated $2 million to create a Center for Muslim World Studies at the university.
The first-of-its-kind in South Florida, the center will be named the Mohsin and Fauzia Jaffer Center for Muslim World Studies and will be housed within the Steven J. Green School of International and Public Affairs.
“This center will advance the understanding of Muslim history and culture, promote interfaith dialogue and illuminate issues affecting Muslims worldwide,’’ said FIU President Mark B. Rosenberg. “FIU is the perfect home for an international solution center dedicated to Muslim world studies.”
Mohsin Jaffer, a physician and founding board member of the Coalition of South Florida Muslim Organizations (COSMOS), and his wife Fauzia, who leads the couple’s charitable foundation, have been intimately involved in the development of a Muslim studies initiative at FIU for several years.
The creation of the center is the result of a request made by the South Florida Muslim community for FIU to lead the way in advancing the study of global Muslim communities.
“For a peaceful and harmonious planet we must understand all its people,’’ said Mohsin Jaffer, who is also a voluntary clinical assistant professor at FIU. “We have to become familiar with their cultures, faiths and concerns. Muslims make up one fourth of the total world humanity and sadly are very misunderstood today.’’
Academically, the center will focus on key themes, including the global Muslim diaspora; interfaith dialogue and intra-faith relations; gender and identity; and Islam and security.
The multidisciplinary curriculum will draw upon FIU’s expertise in religious studies, political science, international relations, sociology, anthropology, geography, economics, history, law, business, women’s studies, human rights and other areas.
On campus, the center will be a space for intellectual and cultural activities for students, faculty, and the community. Existing programs in Middle East Studies and Western Indian Ocean Studies will be housed within the Jaffer Center.
Mohsin Jaffer is president and CEO at Senior Medical Associates and Stallion Medical Management. Fauzia Jaffer is cofounder of Senior Medical Associates and a real estate developer.
Originally from Kenya, the Jaffers have been active in philanthropic projects around the world through their Mohsin & Fauzia Jaffer Foundation, including mobile clinics, a rehabilitation program for disabled children, an orphanage in Africa, women’s empowerment programs in Africa and many charitable organizations in South Florida.
At FIU, the Jaffers have collaborated with the Nicole Wertheim College of Nursing and Health Sciences and the Herbert Wertheim College of Medicine through the UHI Community Care Clinic in Miami Gardens, which provides free medical care to low-income and uninsured individuals.
Mohiaddin Mesbahi, current director of the Middle East Studies Program at FIU, will take over as founding director of the Jaffer Center for Muslim World Studies.
“The Green School is honored to partner with the Jaffers and the entire Muslim community to create a center that will truly be a legacy for the 21st century,’’ said John F. Stack, Jr., founding dean of the Green School. “Its reach is global and it will enable Muslims and non-Muslims to engage in a deeper dialogue about the challenges and contributions surrounding Islam and global Muslim communities.”