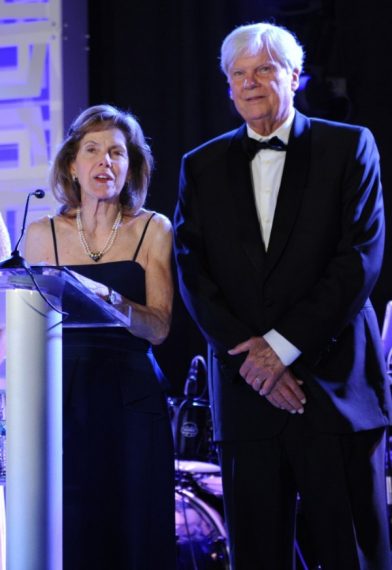 John and Mary Lou Dasburg announced a $1.5 million gift to create an endowed chair in FIU’s Herbert Wertheim College of Medicine (HWCOM). In recognition of this gift, the university will name the chair as the John and Mary Lou Dasburg Chair in Medicine.
The gift was announced at the college’s biennial fundraising Sapphire Gala on Saturday May 12. Held at the InterContinental Miami, this year’s gala, themed License to Heal, drew more than 500 medical, business, civic, and philanthropic leaders. Net proceeds from the event benefit FIU Herbert Wertheim College of Medicine providing medical student scholarships and much needed support for 21st century medical education and training.

“Our Sapphire Gala celebrates the successes and aspirations of our Herbert Wertheim College of Medicine, which is focused on educating culturally-sensitive doctors,” said FIU President Mark B. Rosenberg. “The Dasburg’s generosity will allow us to leverage the expertise of top doctors in their field and help us educate the next generation of medical professionals.”

John A. Rock, the founding dean and senior vice president for Health Affairs, who recently announced his intention to step down from the deanship, will become the first recipient of the John and Mary Lou Dasburg Chair in Medicine.

“Dr. Rock exemplifies the qualities of a great and caring physician,” said John Dasburg, whose daughter, Kathryn, recently graduated from HWCOM. “Our family is proud that the Provost selected Dean Rock to be the first person to hold this chair and look forward to supporting the important work that the college does in educating future doctors and serving the community.”

After the passing of their oldest daughter in a school bus accident in 1988, the Dasburgs committed to supporting education in her name through the Meredyth Anne Dasburg Foundation. Through the foundation and personally, the Dasburgs support the Miami Book Fair’s children literacy programs, the Health Information Project, Seraphic Fire, and the New World Symphony. They also have a son, John Peter, a Miami attorney.
The Dasburgs are generous donors and members of the Herbert Wertheim College of Medicine Dean’s Circle. They have supported the Sapphire Gala for several years and this year co-chaired the event. John Dasburg is chairman and CEO of ASTAR Air Cargo. He has held executive positions with Burger King, Northwest Airlines, Marriott Corp., and KPMG.

“We thank the Dasburgs for their support of our university and the Herbert Wertheim College of Medicine,” said Howard Lipman, CEO of the FIU Foundation, Inc. “They have had — and continue to have — an important role in the elevation of FIU.”