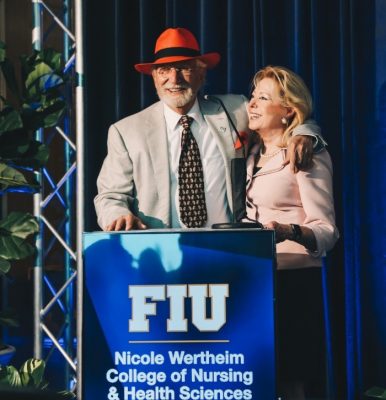 The Wertheim family, longtime benefactors of FIU, have pledged an additional $1 million for the Nicole Wertheim College of Nursing & Health Sciences.
Dr. Herbert Wertheim made the surprise gift announcement during a ceremony to unveil a commissioned portrait of his wife, Nicole Wertheim, for whom the college is named. In 2013, the Wertheims donated $10 million to name the college and support the strategic development of its health and research programs, bolster scholarships for students, and sponsor professional advancement for faculty.

“The Wertheim family’s impact on FIU has been transformational,” said FIU President Mark B. Rosenberg. “Their contributions over the years have helped us prepare health care professionals, entrepreneurs, artists and many other specialists who have made a difference in our world thanks to an FIU education made possible by the generosity of the Wertheims.”

The family and their Dr. Herbert and Nicole Wertheim Family Foundation have made many contributions to the university since 1988 when Dr. Wertheim joined the FIU Foundation Board of Directors.
Their involvement also includes Dr. Wertheim serving on FIU’s Board of Trustees; helping to build the Wertheim Conservatory and Lecture Hall; creating a visiting professorship in the College of Business; establishing the Herbert and Nicole Wertheim Performing Arts Center; and constructing the concert hall’s extraordinary pipe organ, named in memory of Dr. Wertheim’s late mother, Sydell Ida Wertheim.
In 2009, the Wertheims announced a $20 million gift to the FIU College of Medicine, the largest cash donation in university history. The gift was eligible for the State of Florida’s Major Gifts Challenge Grant Program, making its total impact $40 million. In recognition, the college was named the Herbert Wertheim College of Medicine. The FIU Board of Trustees also named him founding chairman of the medical school and Trustee Emeritus.

“The Wertheims have been unwavering in their support of FIU, and this latest gift to our college reaffirms their inspiring vision to encourage superior education, research and practice, as ways to break down barriers to high quality health care,” said Ora L. Strickland, dean of the Nicole Wertheim College of Nursing & Health Sciences. “We are grateful for the Wertheim family’s gift and their commitment to positively transform health care in South Florida and beyond.”

In addition to their contributions, Dr. and Mrs. Wertheim serve on the Nicole Wertheim College of Nursing & Health Sciences Dean’s Leadership Council along with their daughters, Dr. Vanessa Wertheim and Erica Wertheim Zohar, who have extensive nursing and business backgrounds and expertise.
The Wertheims and their foundation have supported hundreds of additional educational and healthcare initiatives in South Florida and around the globe for more than 40 years.
As Herbert and Nicole Wertheim approach their 50th wedding anniversary, the Nicole Wertheim College of Nursing & Health Sciences commissioned a portrait of Mrs. Wertheim to hang on the walls of the student wing of the Academic Health Sciences 3 Building.
David Y. Chang, Frost professor of art and chair of the Department of Art and Art History in the College of Communication, Architecture + The Arts, created the portrait. His work has received international acclaim and is included in private and public collections such as the Frost Art Collection, the Sennelier Art Collection in Paris and the Smithsonian National Art Gallery Collection.
This post “Wertheim family pledges additional $1 million to Nicole Wertheim College of Nursing & Health Sciences” was originally published on FIU News.