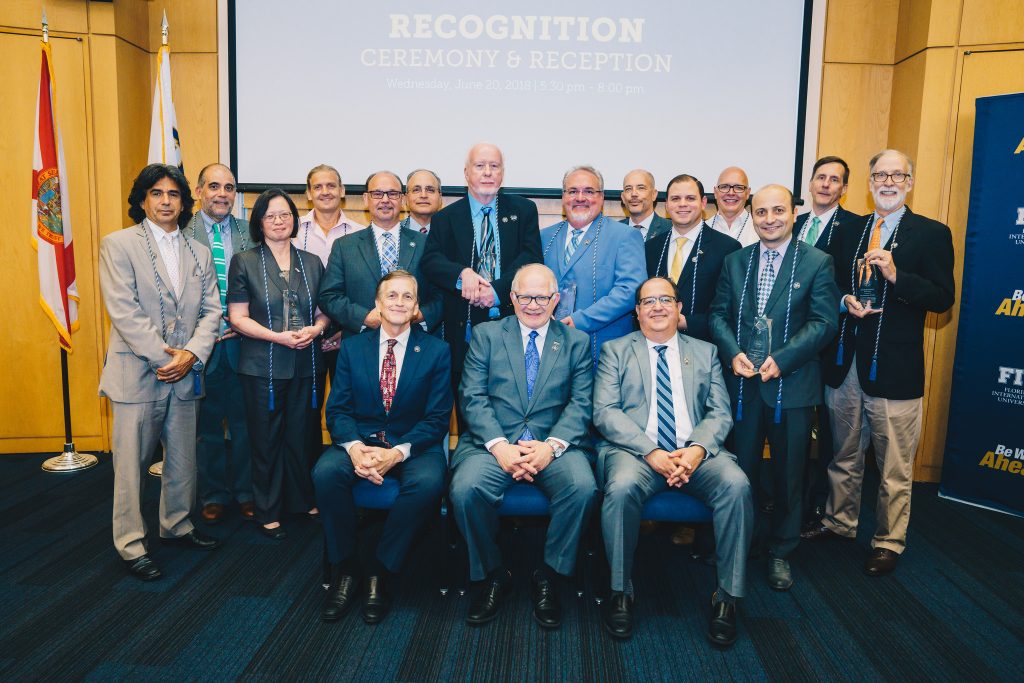 It takes a lot of work by a lot of people to keep FIU a top-tier research institution.
On a recent Thursday night, FIU leaders took time to acknowledge how important the faculty’s role is in that process.

“Faculty are the heart and soul of a university,” said Provost and Executive Vice President Kenneth G. Furton to a crowd  of 150, who had gathered at the Dotson Pavillion at Modesto A. Maidique Campus to celebrate the 13 directors of FIU institutes and centers whose work has earned them the university’s Preeminent and Emerging Preeminent Program status.

These programs have “played a key role in FIU’s progress in research,” said Andres Gil, vice president of Research and dean of the Graduate School, who acted as master of ceremonies for the event.
The Preeminent Programs are: Center for Children and Families; Extreme Events Institute; Global Forensic Justice Center; Institute for Resilient and Sustainable Coastal Infrastructure; Institute of Water and Environment and STEM Transformation Institute.
The Emerging Preeminent Programs are: Brain, Behavior and the Environment Program; Cybersecurity@FIU; FIU Tropics; Health Inequities and Disparities Program; Kimberly Green Latin American and Caribbean Center; Translational Molecular Discoveries; the Wolfsonian Public Humanities Lab.
Led by these programs, annual research awards at FIU have grown by 74 percent in the past 10 years. Annual federal awards have grown substantially in the past four years. National Science Foundation funding has grown 72 percent to $22 million; National Institutes of Health/Health and Human Services has grown 48.7 percent to $26.2 million; U.S. Dept. of Education has grown 52.6 percent to $6.5 million; and U.S. Dept. of Energy has grown 355 percent to $3.2 million.
Gil added that FIU’s patent production has grown substantially in recent years. In 2017, FIU ranked 26th among U.S. public universities and 61st in the world in patent production.
And in 2015, he said, FIU was classified Research I by the Carnegie Foundation, a goal which had originally been set for 2020.

These Preeminent and Emerging Preeminent programs are being celebrated not only because they drive research funding, said Provost Furton, but they are also being recognized for their levels of interdisciplinary activity, their ranking at the national level and their ability to retain and attract new faculty.
By attracting the best faculty to our institution, Furton said, these programs “elevate FIU to a new level of reputation and recognition” and play a significant role in student success. “We are exposing our students to the best educators that are constantly creating new knowledge and developing the solutions for our current and future issues in areas of science and the humanities.”
For their part, the program directors being celebrated also wanted to keep the focus on faculty.
“It’s the faculty that really deserves the credit, said Richard Olson, director of the Extreme Events Institute, at the reception following the awards ceremony. “They do the actual work.”
“This award is not mine,” said William Pelham, director the Center for Children and Families. “I accept it on behalf of my staff – the 30 faculty members, the 150 staff members, the 700 students and 100 grad students working in CCF and the 3,500 families a year who entrust their children to us. I’m grateful to all of them.”
“This is FIU coming of age,” Olsen said.
This post “FIU celebrates Preeminent Programs” was originally published on FIU News.