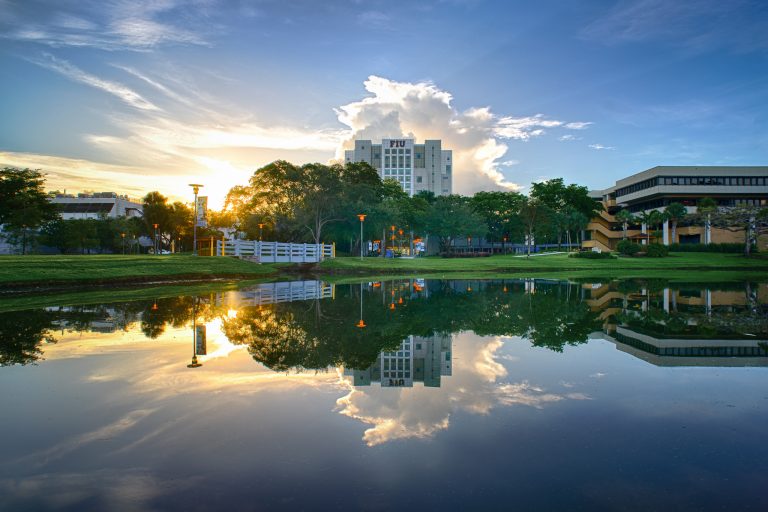 President Mark B. Rosenberg wrote the following op-ed in the Miami Herald on Feb. 2, 2019.
The French writer Guy de Maupassant said: “It is the lives we encounter that make life worth living.”
There is perhaps no better way to describe the meaningful work of higher education. While questions continue to swirl about the relevance and value of a college degree in our rapidly changing world, it is easy to forget that at the heart of our nation’s universities and colleges are people. Our mission, values and purpose is changing — and sometimes saving — people’s lives.

During the recent launch of Next Horizon — FIU’s campaign to raise $750 million (of which we have raised $480 million) to support student success and research preeminence — I was reminded of Maupassant’s quote and the many remarkable, determined and inspiring people I’ve encountered at FIU during the past four decades.
Like student Dorysped Mancebo, who lost her vision when she was 14. One summer, she was visiting her aunt in South Florida when she heard that FIU was opening a law school. Since that day, she’s wanted to be a Panther. With the Dr. Fareed Haj Scholarship Endowment, she has been able to focus on her studies. In May, she will graduate with two degrees . She then plans to attend our College of Law, which has the top bar passage rate in the state.
Then there is Price Destinobles. When he was 13, his mother was incarcerated. Through FIU’s Fostering Panther Pride (FPP) program — which helps homeless and former foster care youth — Price received the support he needed to succeed and excel academically. He graduated in three years and is currently working on a master’s degree in hospitality management. Price once said about FPP: “I honestly try not to even think about what my life would be like without it.” Fortunately, he never had to, because so many community leaders have stepped up to support this life-saving program with nearly $1.3 million in private funds.
And, of course, there are our outstanding alumni, like presidential inaugural poet and double alumnus Richard Blanco. He grew up in Westchester with Cuban-exile parents and rode his bicycle around our campus when there were just three buildings. He’s helping FIU reach our Next Horizon through the Richard Blanco Fellowship for Creative Writing. To mark the public launch of our campaign, he also wrote a special poem — “Next Horizon” — with the reminder that: “And so we rise — with all the instinct and drive of the sun, because there is always another horizon, and another, and another to reach and keep lighting up with our light.”
It’s true: FIU does rise, and always will, because of people like Dorysped, Price and Richard.
Read Rosenberg’s op-ed in its entirety on the Miami Herald’s website.