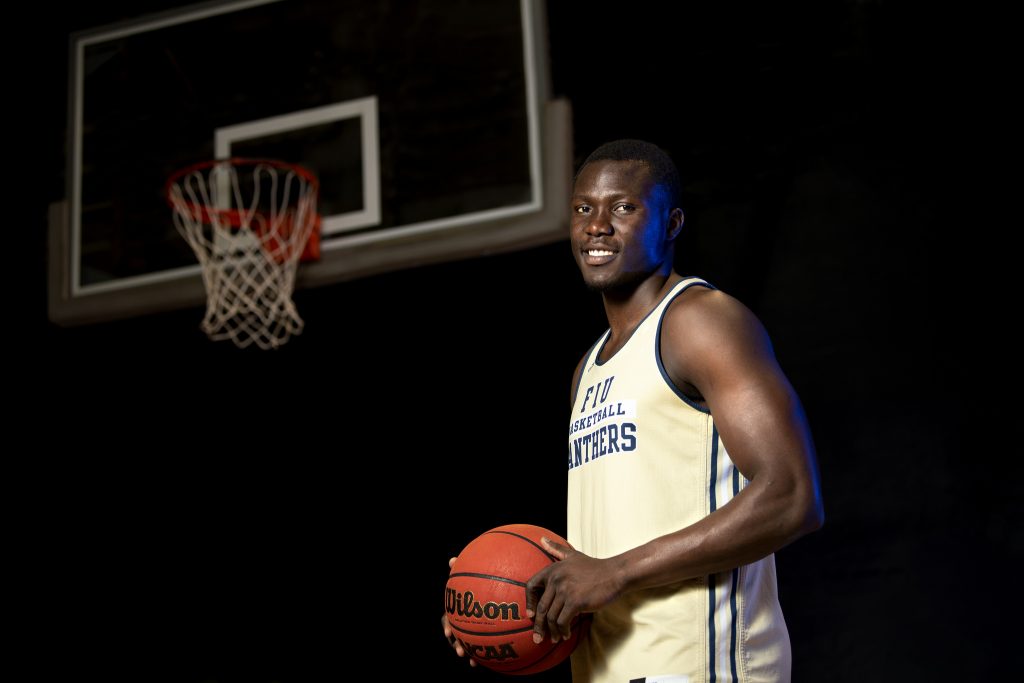 –By David Drucker for FIU News
Six years ago, freshman James Ametepe thought he would never go to college. So even though he has to bike from his home in Kendall to Modesto A. Maidique Campus every day—a 40-minute commute under the scorching Miami sun—he is always smiling.
Ametepe is a biomedical engineering major and a forward for the men’s basketball team. He grew up in Accra, the capitol of Ghana, where his family lived in poverty.

“Back at home, [my brother and I] had to work for our dad before he paid our fees or gave us anything… Every single day, my mom thought about what I was going to eat next,” Ametepe said.
A friend introduced Ametepe to basketball when he was 14 years old, and he immediately embraced it. He saw the sport as a way out, and his 6-feet-5-inch frame suited him well. The teenager practiced whenever he could.
Within a year, his skills were good enough to cross the Atlantic Ocean and play basketball at Westwood Christian Academy in Miami, which he helped lead to a district title in his senior year. There, he met his guardian, Billy Radcliffe.
“He’s like a parent figure. I didn’t really grow up with my dad, he was letting me know what a dad does,” Ametepe said.
Billy’s wife, Nercy, is an FIU alumna and talked to Ametepe about her experience. Many of the upperclassmen at Westwood Christian also went to the university. FIU’s huge population peaked Ametepe’s interest. 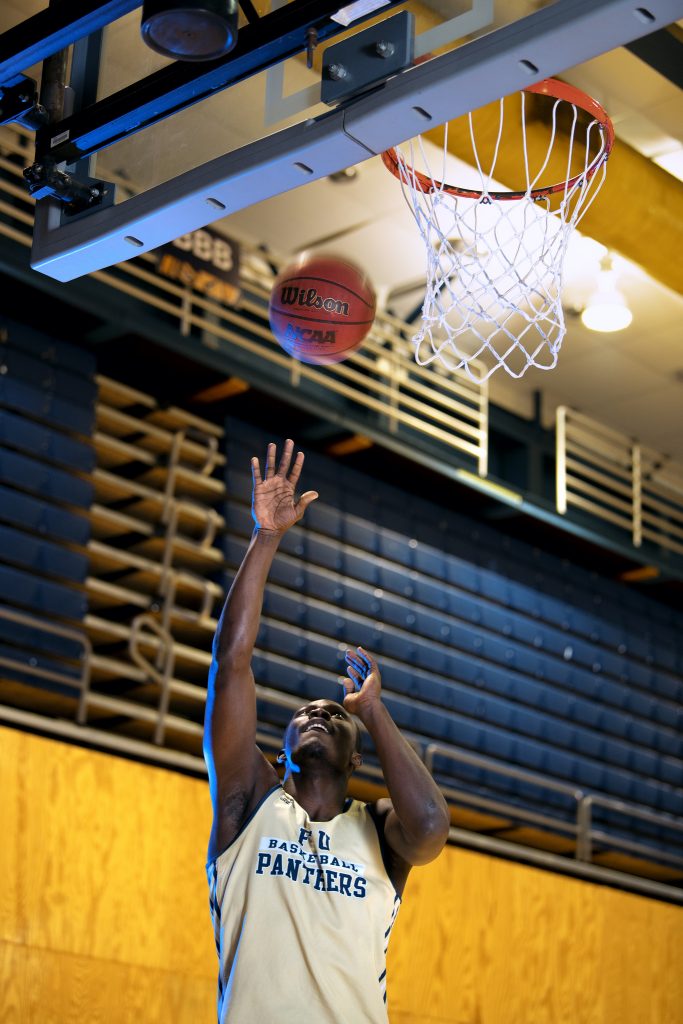 “I love meeting people. Back in high school, you see the same faces every day. But here, you meet someone new every day,” Ametepe said.
Ametepe was accepted into FIU and made its basketball team, which already had an international player on the roster when he arrived (Elhadji Dieng from Senegal). He is close to all of the players now, he says, and even found a teammate to talk trash to: Nigerian-American Osasamwen Osaghae.
“Ghana and Nigeria feud about food, and I tell him — ‘Ours is way better than yours. He’s always on the Nigerian side. I don’t think that argument is going to get solved,” Ametepe said.
Osaghae says that Ametepe is a great teammate and “there to pick you up when you’re down,” but his takes on African food are disingenuous.
“We have this thing in Africa, it’s called jollof rice. [Ametepe] claims that Ghanaian jollof rice is better than Nigerian jollof rice. But he knows that’s not true,” Osaghae said.
The freshman is also enjoying the leadership of Jeremy Ballard, FIU’s first-year head coach. Ametepe appeared in 12 games his freshman year. The Panthers won 19 games in the regular season this year—the third-most wins in the program’s Division I history.
“He’s nice, but when it comes to getting work done, he’s on top of it. On the court, there’s no messing around. You better go hard. He brings the best out of people,” Ametepe said.
Attending the university is still surreal to the international student. When college became a possibility for him, he knew he wanted to study biomedical engineering. Since a young age, he was intrigued by how some animals have unique body parts that allow them to accomplish niche tasks.
Ametepe thought he would never go to college; now he is a member of FIU’s Honors College.
“When you’re in the Honors College, you’re intelligent and smart. When I see people in class, I’m like, ‘Yeah, these people are more intelligent than me.’ I just sit there and look at them,” Ametepe said, laughing.
Ametepe has not returned to Ghana since he left in 2015. The flights are too expensive, he says. Instead, he is saving his money for something else.
“I’d rather send that to my mom to use,” Ametepe said. “Then when it’s all said and done and I’m done with school, I might come back, or let my mom come here for my graduation.”
To learn about how you can support students’ dreams to earn a college education, visit NextHorizon.FIU.edu.