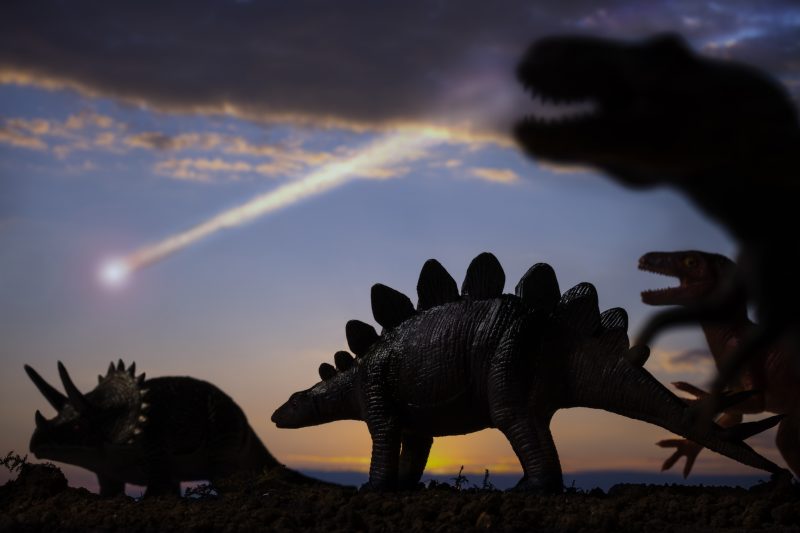 –By Ayleen Barbel Fattal for FIU News
A discovery confirms the meteor strike that likely wiped out dinosaurs produced tsunami-like waves reaching what is now North Dakota, according to FIU Professor Florentin Maurrasse who helped identify fossils and interpret data for the recently released findings.
That means the waves traveled more than 2,800 miles from where the meteor struck off Mexico’s Yucatan Peninsula. Palm Beach Museum of Natural History Paleontologist Robert DePalma unearthed 66-million-year-old fossils from the Hell Creek Formation rocks in North Dakota. He and a team of researchers, which included Earth and Environment’s Maurrasse, determined the freshwater fish fossils found were the first casualties of Earth’s last mass extinction event.

“We knew before that there were such waves associated with the bolide impact, but it is the first time that it is proven convincingly that such tsunami waves reached that far away on the continent,” Maurrasse said.
Maurrasse knows a great deal on the matter of meteor strikes. In 1992, he discovered tektites — the tiny glass beads formed by molten rock that indicate a meteorite impact. Fifty percent of the fossilized fish found by DePalma had tektites in their gills. Amber found at the site also contained tektites whose chemical composition was unchanged for millions of years.
DePalma who is a graduate student at the University of Kansas conducted most of the sophisticated geochemical analyses in laboratories at FIU’s Department of Earth and Environment.
The findings were recently published in the journal Proceedings of the National Academy of Sciences. In addition to FIU and the University of Kansas, the international research team includes Vrije Universiteit Amsterdam, University of Manchester, Florida Atlantic University, Black Hills Institute of Geological Research, Katholieke Universiteit Leuve, University of California, Berkeley.
To learn more about how you can support research excellence at FIU, visit NextHorizon.FIU.edu.