–By Gisela Valencia for FIU News

“Musical training is a more potent instrument than any other.” — Plato, The Republic

Music is at the heart of the human experience. Since the dawn of civilization, humans have been making sounds, living in rhythm, speaking in song.

Since 1996, FIU’s school of music has been churning out generations of talented musicians who’ve jumped into successful careers as musicians, artists, composers, music educators and arts administrators in a highly competitive industry. The school has produced wildly successful alumni — recent examples include Tony Succar ’08, MA ’10, who is the proud winner of two Latin Grammys; Carlos Rafael Rivera ’96, who earned an Emmy and a nod from the Oscars for his scores; and Kevin Sylvester — known as Kev Marcus — one of the artists in Black Violin, a duo that pushes boundaries, brings classical music and hip hop together and was nominated for Best Contemporary Instrumental Album at the Grammy awards.

Additionally, in 2021 the school ranked second in the country for its online master’s in music education according to Best Value School. Most recently, the school — in part due to university-wide support — received one of the most prestigious honors conferred on music schools and conservatories: designation as an All-Steinway School, which recognizes schools that demonstrate a commitment to excellence by only using pianos made by the world’s leading manufacturer, Steinway & Sons.

Now the school is on the cusp of even greater achievements thanks to the continued support from a historic $10 million gift from longtime FIU supporters and committed Panther advocates Dr. Herbert and Nicole Wertheim. The gift — part of FIU’s Next Horizon campaign — is the largest donation ever to be gifted to a school of music at a public university in Florida. By the end of nine years, the gift will be matched by FIU, which will result in a whopping $20 million all going directly to expand the school’s programs, scholarships, graduate assistantship opportunities for students and support for faculty. The school is also renovating its physical building, the Herbert and Nicole Wertheim Performing Arts Center, to add a café and community gathering space for students. In recognition of the outstanding contribution of the Wertheims, the school renamed itself in honor of the couple.https://www.youtube.com/embed/kYsVEGdrSWM

“This gift expresses our continuing passion for and commitment to FIU, our extraordinary hometown university – and the importance of the performing arts, an essential aspect of quality of life,” Dr. Wertheim says. “This gift to support FIU’s dynamic performing arts programs will leverage previous investments we have made in health and business, resulting in enhanced interdisciplinary collaboration between areas and impacts that will benefit our students and community.”

Through the gift’s impact, the Herbert and Nicole Wertheim School of Music & Performing Arts (nicknamed “The Wertheim”) is poised to become a powerhouse for the local and national music scene — and to rise in the ranks of music schools across the country.

“This gift is truly a gamechanger,” says Brian Schriner, dean of the College of Communication, Architecture + The Arts (CARTA), which houses the school of music. “It’s really tied to the strategic plan of the university and leverages FIU’s priorities and the priorities of the areas that the Wertheims have given other gifts to across the university, such as medicine, nursing and business. Everything we’ve ever wanted to do at the school of music, we’re going to be able to do with this gift. It will keep moving the school forward nationally.”

The gift, Schriner adds, will positively impact student success and further CARTA’s mission to prepare diverse leaders with global perspectives who will drive the information, innovation, art and cultural economy of South Florida and beyond.

Karen S.F. Veloz, the director of The Wertheim School of Music & Performing Arts, agrees. “This will be transformative for the students, faculty and programs that we offer,” she says. “The gift is geared toward student scholarships and faculty and program development. This is what helps a school of music rise in rankings and reputation, and now we can do that because of Dr. and Mrs. Wertheim and their gift.”

The gift allows the school to focus on strengthening programs to prepare students to land a variety of arts-related jobs. The school will be expanding its academic offerings to include three new degrees over the next two years. In 2023, the school is planning to launch an arts administration program, which will make FIU one of only a few hundred universities across the country offering the degree. The new degree will revolutionize the career possibilities students will be prepared to enter after graduating FIU.

“I’m very excited about the arts administration program,” says Veloz. “It allows opportunities for our grads to increase workforce portfolio. They’ll be able to work for orchestras across the country that need music directors or executive directors and be able to work for the Broadway Musical Theatre, or develop a concert or a musical tour. This degree will prepare students for those roles. It really expands the [career] horizons.” 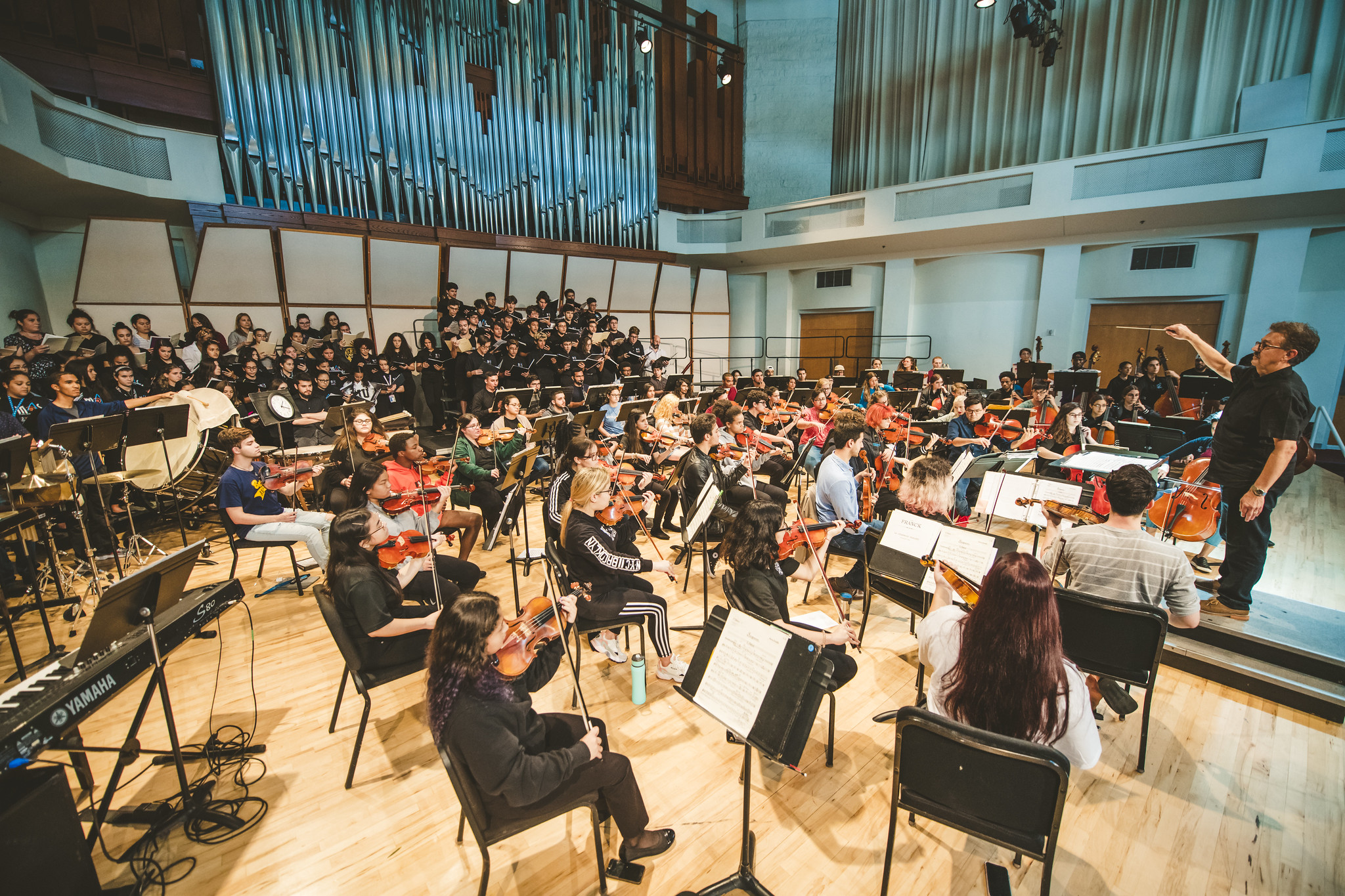 Students rehearse for the 2019 FIU Music Festival at the concert hall at the Herbert and Nicole Wertheim Performing Arts Center.

The school also plans to unveil a program uniting music and wellness: music therapy. This discipline has increasingly gained attention — in 2019, for example, the National Institutes of Health committed $20 million to support research projects revolving around music therapy and neuroscience — as a way to promote physical rehabilitation, wellness and stress management in a wide range of individuals, from children with disabilities and veterans to people with dementia. The Wertheim School of Music & Performing Arts will be working in collaboration with the Herbert Wertheim College of Medicine to roll out the degree.

“As a public research university, for us to provide a music therapy program is amazing,” Veloz says. “It will definitely allow for us to work with external funding partners to further research in the area. We look forward to advancing music therapy, and to providing another career option for our students to pursue.”

In the fall of 2022, a much-desired musical theatre degree will launch. The program is one students and community members have expressed deep interest for and which will provide students with the skills to audition for Broadway musicals and other such prestigious roles.

The Wertheims’ gift will also continue to support the Sydell Ida Wertheim Concert Organ. The crown jewel of the Herbert and Nicole Wertheim Performing Arts Center, the organ is the largest concert organ in the southeast United States. It was donated to the university by the Wertheims in 1999 and named in honor of Dr. Wertheim’s mother. The gift will continue to help grow the new Wertheim Graduate Program in Organ Performance and will also allow the school bring in top musicians to FIU to meet with students and share their expertise. Additionally, it will allow for FIU’s greatest student and faculty talents to do something many of the top music schools across the country do — go on tour, effectively raising awareness about their talent and sharing music with audiences across the country.

Thanks to the gift, the future of music at FIU is bright indeed.