Social butterflies may be more likely to continue studying science, technology, engineering, and math and ultimately take up a STEM career, according to new research.
The study, conducted by FIU post-doctoral researcher Justyna P. Zwolak and alumnus Remy Dou, was published recently in the journal Physical Review of Physics Educational Research and was listed in the Editor’s Choice section of Science magazine. It shatters the age-old stereotype of the typical scientist — that of a lone researcher clad in a lab coat and protective eyewear, toiling meticulously in a windowless lab.

“We know that as people, connections matter. Who you know matters,” Dou said. “Science is a process of getting to know others and working with others and connecting with others. Science is this interactive, collaborative process. I think that needs to come out when we teach students.”

Their research suggests increasing the interactions among students in introductory science courses may hold the key to increasing the number of STEM graduates — a chronic area of concern in the United States.
More than 230,000 STEM jobs go unfilled annually, and minorities and women continue to be underrepresented in STEM fields, according to a 2016 STEM index produced by defense giant Raytheon and U.S. News and World Report. 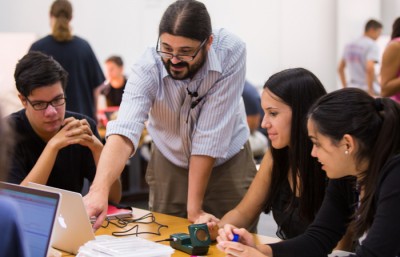 FIU, recognized as the nation’s leader in producing STEM degrees for Hispanics, redesigned its introductory physics courses to help maintain students’ interests. Instructors no longer just lecture students. Instead, they introduce the day’s lesson and allow students to work collaboratively to discover which physics principles are at play.
Without the confines of a standard lecture hall, Zwolak and Dou were able to study how often students interacted, with whom and what kind of effect it had on individual students’s performance, and their likelihood to continue studying physics.
Their findings show that students who sought out their peers and those specific students who were sought out by others were more likely to continue taking physics courses.

“How willing they are to interact with others, to reach out to others, that was telling us more about their chances of persisting to the next course,” said Zwolak, of FIU’s STEM Transformation Institute. “It doesn’t depend solely on doing well academically, but also on doing well socially.”

Professors who teach similarly designed courses, could institute a short five-question survey students could complete on their phones at the end of class that will help them gauge whether students have enough interaction, and whether those interactions are meaningful.
“The best measure was how well connected within the entire network the person is,” Zwolak said. “For students who are really close to others, the access to information and its quality is going to be better because they could be connected to the smartest person in class through one or two others.
“For professors, analyzing the closeness of students gave us up to 75 percent accuracy in predicting whether a student would persist or not,” she added.
This post “To keep students interested in physics, have them interact” was originally published on FIU News.