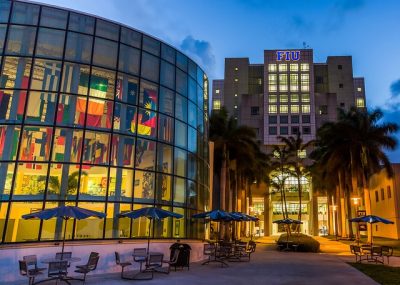 The process of being named an ERC is highly competitive. NSF chose four out of more than 200 applicants.

“The fact that FIU is part of two of the NSF ERC awards speaks volumes of the work we are doing at the College of Engineering & Computing and university-wide. For FIU to be selected among some of the nation’s top universities is a huge validation and acknowledgement of the pioneering research of our faculty,” said FIU Provost and Executive Vice President Kenneth G. Furton. “This is also a credit to Ranu Jung, whose leadership in the College of Engineering & Computing led to the preparation of these proposals.”

Each of the ERCs are five-year awards for approximately $20 million and are renewable for a total of 10 years and $40 million.
The first ERC, PATHS-UP (Precise Advanced Technologies and Health Systems for Underserved Populations), aims to develop affordable health devices and systems for underserved communities. There will be an emphasis on diabetes and cardiovascular diseases in the development of these technologies. Texas A&M University is the lead university, and FIU’s other institutional partners include Rice University and the University of California at Los Angeles. The FIU team from the Departments of Biomedical Engineering and Mechanical & Materials Engineering, as well as the Herbert Wertheim College of Medicine includes Jessica Ramella-Roman (Co-PI), Chunlei Wang, and Norman Munroe.
The second ERC, CELL-MET (Nanosystems Engineering Research Center for Cellular Metamaterials), hopes to transform cardiovascular care by synthesizing personalized heart tissue for clinical use. According to the NSF, breakthroughs would revolutionize the ability to grow large, multi-functional sections of the heart and other human tissues. CELL-MET will be led by Boston University in partnership with FIU and the University of Michigan, as well as six affiliate institutions: Harvard Medical School, Columbia University, the Wyss Institute at Harvard, Argonne National Laboratory, the École polytechnique fédérale de Lausanne in Switzerland, and the Centro Atómico Bariloche/Instituto Balseiro in Argentina. The FIU team from the Mechanical & Materials Engineering and Biomedical Engineering Departments, and the Department of Physics within the College of Arts, Sciences & Education includes Arvind Agarwal (Co-PI), Chenzhong Li, and Jin He.

“The purpose of the NSF ERC program is to drive innovation and education through partnerships between academia and industry,” said FIU Vice President for Research and Economic Development Andres Gil. “At FIU, we are focused on research that provides solutions to grand challenges. These ERCs make FIU one of the national leaders in driving translational research and technical innovations in healthcare.”

According to NSF Director France Córdova, for more than 30 years, NSF Engineering Research Centers have promoted innovation, helped to maintain our competitive edge, and added billions of dollars to the U.S. economy.
The two new grants bring FIU’s participation in ERCs to three projects. FIU also is part of the multi-university team on the grant ASSIST (Advanced Self-Powered Systems of Integrated Sensors and Technologies) to pioneer small health and environment-monitoring devices. FIU partnered with North Carolina State University, which leads the effort, as well as Pennsylvania State University and the University of Virginia on a national nanotechnology research effort to create small, wearable, and self-powered devices to help people monitor their health.
In addition to Texas A&M University and Boston University, the other two lead universities to receive awards in 2017 were Purdue University and the Georgia Institute of Technology.
This post “FIU to collaborate on health breakthroughs through NSF Engineering Research Centers” was originally published on FIU News.